In October, the Clean Water Act turned 40 years old. I believe it would be a good idea to review how far the protection of our water resources has come in those four decades, but much more needs to be done.

Forty years ago, rivers were actually on fire from the release of chemicals and petroleum products from industry. Wetlands critical for both groundwater retention and habitat for wildlife, were being plowed under and filled for cropland.

Streams, rivers, lakes, bays, and oceans were being assaulted by unregulated runoff, chemical dumping, raw sewage, and siltation. People used these bodies of water for recreation. Public health warnings were so common, even going fishing was next to impossible.

The Clean Water Act brought large scale cleanups, but after 40 years, there is more to do. Some communities have unsafe drinking water. Wastewater treatment plants and other infrastructure need upgrades and industry must still be monitored to ensure it is complying with regulations. As an example, consider the following:

In August, a hauling company needed to dispose of large quantities of thick drilling slurry being produced from boring under I-66 to accommodate fiber-optic cables. With their designated landfill overwhelmed, a broker familiar with such waste products was hired to find alternate dumping sites.

Those sites turned into five, illegal, unpermitted sites in southern Berkeley County. The largest of these had over 30 loads dumped onto an accepting landowner’s property that ran into Specks Run, a tributary of Opequon Creek. An adjoining neighbor spotted the discharge and alerted West Virginia’s Dept. of Environmental Protection, who stopped the dumping. Cleanup efforts have been going on 24/7 as they remove the slurry from 7,000+ feet of stream. Dumping something the consistency and color of super thick tomato soup has not made the cleanup easy. Nothing is left alive where the slurry first entered the stream. Available analysis has not indicated any carcinogens or toxins, but elevated levels of chloride (salt), probably from unflushed brine transport trucks have undoubtedly impacted the stream.

As a landowner downstream, this has been quite a shock. Even though the slurry is much diminished, some has entered the Opequon. Fortunately, The Opequon Watershed, Inc., established in 1992, is helping coordinate efforts to document the spill and its impact, and stands ready to develop a remediation and monitoring program.

The Clean Water Act has improved your life and those around you. We cannot take clean water for granted.

Winchester draws water from the Shenandoah River and Frederick County will soon be drawing from Opequon Creek. Consider the impact of an illegal spill containing persistent, toxic chemicals into those waterways.

If you would like to view videos of the spill, go to our website, opequonwatershed.org, and look at “recent posts”. While you are there, look around, perhaps you would consider becoming a member (no dues) and help protect and improve our valuable asset.

J.Stephen Bauserman is a local landowner and president of The Opequon Watershed Inc. 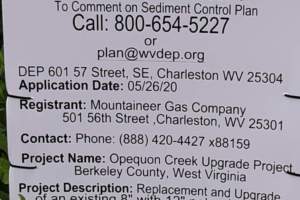 On July 31, Rockwool Ranson announced on its Facebook page[...] 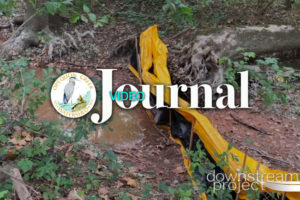 Specks Run was filled with construction drilling mud from illegal dumping from a Dominion Energy project in Virginia.